Pawn Shop to the Stars 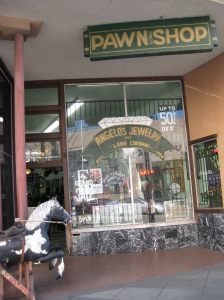 Another day, another pawn shop to write about.  🙂  Ironically, just around the corner from the now defunct Beverly Hills, 90210 pawn shop that I blogged about yesterday, is yet another local pawn shop that also has a  filming history.  Who knew that pawn shops were such popular filming locations??  🙂  Angelo’s Jewelry and Loan Company, which touts itself as the “Pawn Shop to the Stars”, opened up in 1984 and has the distinction of being Santa Monica’s oldest pawn shop.  Since it was around at the time, I can’t help but wonder why it wasn’t used as Dylan’s pawn shop in the “Anaconda” episode of 90210.  Or why there would be two pawn shops in such close proximity to each other.  Perhaps that explains why the “Anaconda” one is no longer in business.  Anyway, even though the tiny shop was overlooked by 90210 location scouts, it did get featured just last year in the Owen Wilson movie Drillbit Taylor. 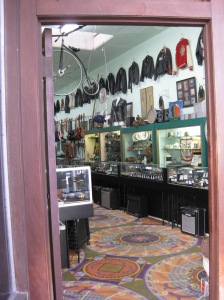 In Drillbit Taylor, a group of nerdy teenage boys hire con man Owen Wilson to be their bodyguard.  But instead of protecting them, Drillbit ends up robbing them blind and hawking their goods at a local pawn shop.  That pawn shop was Angelo’s.  And it looks exactly the same in real life as it did in the movie.   According to the owner Angelo’s has also been featured in other productions over the years, but he was unable to recall which ones – which boggles my mind!  LOL  My guess is that Angelo’s has appeared in one or more of the L.A. based crime dramas such as Without A Trace, Cold Case, or the CSI shows. 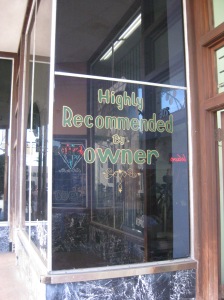 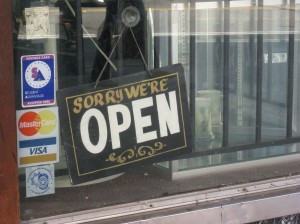 I found this location thanks to Mike over at MovieShotsLA, but the truth is I really should have recognized it myself. For over two years I took acting classes right around the corner from Angelo’s and would pass by the shop at least three times a week on my way to grab a coffee before or after class.  Every time I walked by I would laugh at the silly signs in the store windows (pictured above).  So when Mike told me that my acting class pawn shop was the very same pawn shop featured in Drillbit Taylor, I had to mentally kick myself for not immediately recognizing it.  And I call myself a stalker!!  LOL  Sometimes I really think all that blond dye goes straight to my head.  LOL  Thanks, Mike! 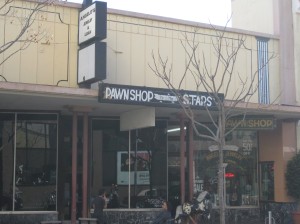 According to this article, Angelo’s claim of being the “Pawn Shop to the Stars” is actually not a joke.  Apparently movie stars do stop in to Angelo’s from time to time, although the owner refuses to divulge which ones.  I didn’t see any while I was there, but who knows, while stalking the place you might end up spotting a celeb or two!  🙂 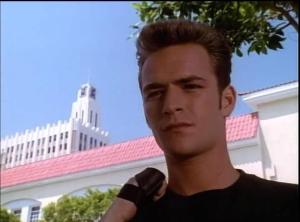 No, the above title does not refer to the 1997 JLo/Ice Cube action flick Anaconda (a movie I have never seen), but a Beverly Hills, 90210 episode of the same name.  The other day while I was hanging out on the Third Street Promenade in Santa Monica, Mike (from MovieShotsLA) called me and asked if I wouldn’t mind stalking a nearby location for him.  He was looking for the pawn shop that down-on-his-luck Dylan visited in that Second Season episode, which he could tell from the above screen capture was located somewhere on 2nd Street in Santa Monica. 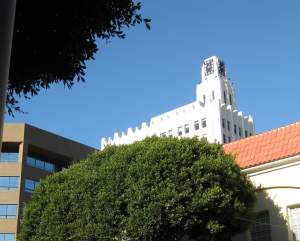 While watching the pawn shop scene, Mike immediately recognized the famous Santa Monica Crocker Clock Tower in the background behind Dylan.  The Crocker Clock Tower is somewhat of a landmark building in Santa Monica, most likely due to its unusual art deco style and size – it is the second tallest building in the city.  The clock tower is also famous for another reason, though.  On January 17, 1994, at 4:31 a.m. the Northridge Earthquake struck Los Angeles and its surrounding area.  The 6.7 magnitute quake not only rocked the city, but the Crocker Clock Tower as well, stopping its hands at the precise moment the first wave struck.  For over six years afterwards the clock’s hands remained frozen in time at 4:31 a.m., a constant reminder to all who viewed it of the devastating quake.  In 2000, the clock was finally fixed for the meager cost of $75,000. 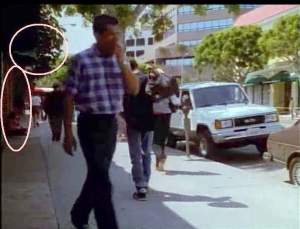 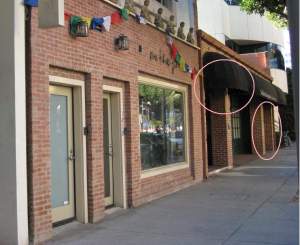 Using the clock tower (and the above screen capture) as his guide, Mike was able to figure out the exact location of Dylan’s pawn shop, which I am sad to say is no longer in business.   Such a bummer!  Currently a sound design company named RMD Entertainment occupies the space.  “Anaconda” was filmed 17 years ago and in that time a lot on 2nd street has changed.  While I haven’t been able to confirm it, I do believe that filming took place at an actual pawn shop that was once located in RMD’s space.   Although it is also a possibility that a fake pawn shop was set up in a vacant storefront at that location strictly for the filming of the “Anaconda” episode.  But I believe the former is true. 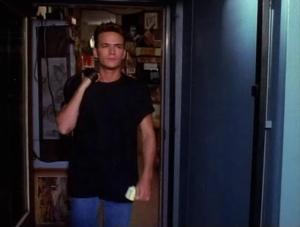 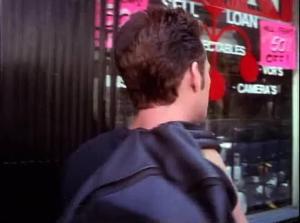 I am constantly shocked when locations Mike and I stalk look different than how they appeared onscreen.  Mike is always telling me that I need to remember that these episodes were filmed almost two decades ago and that the locations where they were filmed will have changed considerably in twenty years time.  But since Beverly Hills, 90210  is so frozen in time for me, I am always expecting the locations to be frozen in time, as well, and am always shocked when I find that they aren’t.  LOL

Stalk It: The pawn shop featured in “Anaconda” is now RMD Entertainment which is located at 1418 2nd Street in Santa Monica. The Crocker Clock Tower building is located just around the corner at 225 Santa Monica Boulevard.

The other night while watching some old episodes of 90210, I was super excited to recognize a location from the Season 3 episode entitled “Midlife . . . Now What?”  In the episode Brenda, Kelly, and their moms, along with Donna and Andrea, try to spend a relaxing weekend at a health spa, but, as usual, drama ensues. Kelly’s mom, Jackie, runs into her former coke dealer and Brenda overhears some disturbing gossip about Kelly’s step-dad. Such a great show! 🙂 Anyway, the health spa that the girls spent the weekend at was actually Loews Santa Monica Beach Hotel, a location my boyfriend and I have visited on many occasions.

So, of course, after watching the episode, I immediately dragged my boyfriend to the Loews to do some stalking.  But I was crushed to see that the lobby was completely different than I remembered it due to a recent remodel.  Up until just a couple of months ago, the lobby looked exactly the same as it did in the 90210  days.  But, sadly, now the lobby is virtually unrecognizable.  Gone are the large chairs and couches that used to line the lobby area, and which Brenda and Kelly sat in upon their arrival at the spa, and in their place is a long row of tall palm trees which now run the length of the lobby.  😦

The hotel pool was also featured extensively in the episode – Jackie sits by the pool and contemplates using cocaine again and later has a poolside heart to heart with Kelly. I am happy to report that not only did Jackie decide not to start using drugs again, but that the hotel pool looks exactly the same as it did when filming took place there 15 years ago.  An episode of Season 10 of The Bachelor with triathlete Bachelor Andy Baldwin was also filmed at the hotel pool. The girls competed in a triathlon competition around the pool to win private time with Andy.

The Loews is a really nice place to stop in and have a drink. The hotel is situated right on the beach in Santa Monica and has amazing views of the Pacific and the famous Santa Monica Pier. Be sure to keep your eyes peeled if you visit the Loews as celebs often frequent the hotel.  The last time my boyfriend and I were at the lobby bar, Jorja Fox from TV’s CSI walked in off the beach after a surfing lesson to have a drink. 🙂

Until next time, Happy Stalking! 🙂

Stalk It: The four-diamond Loews Santa Monica Beach Hotel is located at 1700 Ocean Avenue in Santa Monica. You can visit their website here. Their rooms will run you about $400 a night.

This weekend I dragged my boyfriend to stalk the mansion that Eddie Murphy and his new cop buddies storm at the end of the movie Beverly Hills Cop.  The house is not actually located in Beverly Hills, but a good 20 minutes in Santa Monica.  The home is absolutely ginormous – I mean the guard shack at the front of the property is easily bigger than my whole house!! 🙂

While stalking the house, we met the man who lives in the home across the street and he told us some really good gossip.  During the filming of Beverly Hills Cop, the man came home to find his car had been towed and his mailbox had been torn out and replaced with a new one – apparently neither his car nor his mailbox fit in with the image the producers were trying to portray in the movie!  LOL  According to the neighbor, the mansion is an oft used filming location and has appeared in several commercials, TV shows and movies.  He told us the home is currently owned by director Herny Jaglom, but his ex wife lives there while Henry lives in a home up the street.

Sadly, you can’t see very much of the home from the street.  But you will immediately recognize the gates and the guard shack from the scenes in Beverly Hills Cop  when Eddie Murphy stakes the place out.  You can see better views of the house by cyber-stalking it on Zillow.

Stalk It: The Beverly Hills Cop  mansion is located at 609 E. Channel Road in Santa Monica.  After stalking the mansion, head over to the nearby Third Street Promenade in Santa Monica – one of my favorite shopping destinations.  The Promenade is a large outdoor retail area with tons of cute shops, kiosks and restaurants.  It’s also where Pee Wee Herman’s bike was stolen in the movie Pee Wee’s Big Adventure.