One of my favorite places to visit in all of LA is the Sunset Tower Hotel, located on the legendary Sunset Strip in Hollywood.  The Sunset Tower Hotel was built in 1931 by architect Leland A. Bryant for owner E.M. Fleming.  The Art Deco building, which originally functioned as an upscale apartment house, was the very first earthquake proof property to be built in Los Angeles.   While the hotel enjoyed some glory years during the hey dey of Hollywood, in the 1980s it fell into serious disrepair and was saved from demolition when it was purchased by London’s St. James Hotel chain.  Peter de Savary, owner of the St. James chain, poured $46 million into restoring the Sunset Tower and renamed it the St. James Club.  Since that time, the hotel has undergone several more renovations and name changes, until 2005 when it was purchased by New Yorker Jeff Klein, who restored the hotel to its original name and former grandeur.

During the hotel’s glory years numerous celebs called the Sunset Tower home, including Howard Hughes, Ava Gardner, Truman Capote, John Wayne, Jean Harlow, Clark Gable and Carole Lombard, Greta Garbo, Joan Crawford, Errol Flynn, Billie Burke aka Glinda the Good Witch, Mae West, Elizabeth Taylor, Conrad Hilton, gangster Bugsy Siegel – who was eventually evicted for running a gambling center out of his room, Frank Sinatra, Diana Ross, Tim Curry, my fave Marilyn Monroe, and Iggy Pop, who made a habit of jumping into the hotel pool from his apartment window.  Today, the Tower is still popular with celebs.  The hotel’s restaurant, the Tower Bar, is a favorite of Jen Aniston, who dines there regularly.  Tom Cruise, Sean Penn, Posh Spice, Brian Grazer and Barbara Walters have also all been spotted at the Tower Bar grabbing a bite to eat.  According to Wikipedia, during her pink-wig-wearing days, Britney Spears tried to book some rooms at the Tower.  Hotel owner Jeff Klein reportedly said to the hotel manager “If that piece of trailer trash so much as enters my driveway, you are fired!  She can’t come here with all my chic guests, she’ll ruin the place!”  LOL  Love it!  It  was during that same time period that the Bel Air Hotel also reportedly refused to rent rooms to BritBrit. 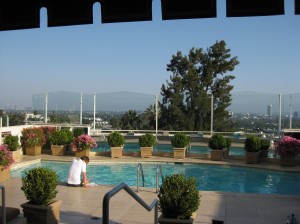 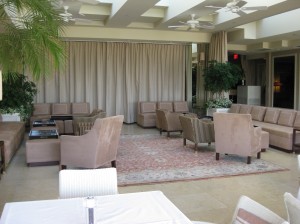 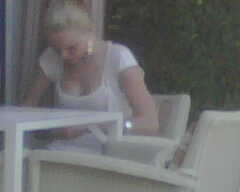 The hotel’s poolside Terrace Bar, my fave place to grab a drink in all of LA, is also quite popular with the celebs.  The first time I visited the Terrace, Kate Bosworth was there with her model boyfriend James Rousseau. I just had to go up to her, too, to tell her how much I loved Win A Date With Tad Hamilton.    She ended up signing an autograph for me and seemed genuinely thrilled that I had such good things to say about Win A Date.  Kate truly could not have been nicer and I can honestly say she was hands down the kindest out of all the celebs I have ever met.  And her boyfriend was a total cutie, too!!!! 🙂  I took the above pic of her with my blackberry, but it didn’t come out very well.  LOL

The legendary hotel has also been featured in countless television and movie productions, including The Player, Spinal Tap Goes to 20, Shadow Hours, Freaky Friday, Murder My Sweet, Get Shorty, Wayne’s World II , Strange Days, The Italian Job,  and  Rich Girls.  In The O.C., the hotel stood in for Newport Beach’s Four Seasons Hotel which was owned by Ryan’s rival, Oliver, on the show.  Only the exterior of the Tower Hotel was shown in The O.C.  For the interior shots of the lobby and Oliver’s penthouse suite, a different hotel was used – one which I am still trying to locate. 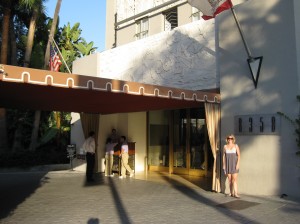 Stalk It: The Sunset Tower Hotel is located at 8358 Sunset Boulevard in Hollywood.  I highly recommend stalking the Sunset Tower – the poolside Terrace Bar is a great place to grab a drink while enjoying one of the best views in all of LA.