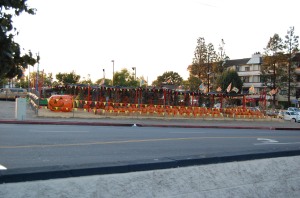 Last week, thanks to Mike over at MovieShotsLA, I was able to stalk the pumpkin patch that was owned by Ray Pruit’s family on the original Beverly Hills, 90210.   I was shocked when Mike told me that the property where filming took place is the location of an actual pumpkin patch in real life.  I had been convinced that producers just dressed an empty lot for the filming of 90210, but in reality they rented out a real pumpkin patch that has occupied the same corner in Sherman Oaks for over fifteen years.

When I drove up to the patch I just about keeled over with excitement as there was a large sign out front which read “Ray’s Pumpkins”.  I naively thought the owner named the patch after Ray Pruit because of the filming that took place there, but it turns out that the actual owner’s name is Ray!  How cool is that!

Ray really could not have been nicer and spoke to me about the filming of 90210  for a good 15 minutes.  He said that everyone on the cast and crew was very nice and very professional.  Even though the pumpkin patch scene lasted only about four minutes and was shown in only one episode (the Season 5 episode entitled “Homecoming”), the filming took a full two days to complete.  Ray told me that during the filming, some construction was being done on an apartment building located across the street from the patch.  At one point the construction noise got too loud, so the producers of 90210  actually paid to have all construction shut down for the remainder of the shoot!  LOL  The cast and crew of 90210  returned to Ray’s later that same year and the real Ray’s Christmas tree lot stood in for the one owned by the Pruit Family in a Christmas episode of the show.  Ray said there is always some sort of filming taking place at the patch.  He couldn’t remember all of the productions that had filmed there, but he did say that Dancing With The Stars  featured the patch in a brief segment last year.

Ray’s Pumpkin’s is a very cool pumpkin patch and I highly recommend stalking it.  There are hundreds upon hundreds of pumpkins to choose from and tons of cute Halloween merchandise and decorations for sale.  Ray told me that he also gets quite a few Valley celebs visiting his patch each year, so you just might get to rub elbows with the stars while pumpkin shopping.  🙂  Unfortunately I visited Ray’s after it was already dark outside, so my pics didn’t turn out very well and don’t really do the patch justice.  But a BIG THANK YOU to Mike for providing the top pic.  🙂 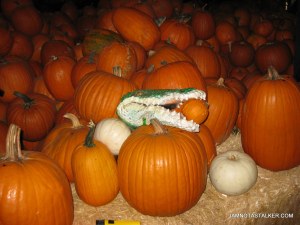 Stalk It: Ray’s Pumpkins is located at the corner of Hazeltine Avenue and Moorpark Street in Sherman Oaks.  Ray also owns the Peterson Ranch Fruit Stand located at 3402 Los Angeles Avenue in Somis, CA. The fruit stand is also a frequent filming location.  It is most often used in commercials and was featured recently in a car ad.