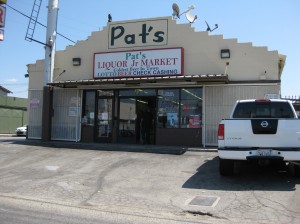 At the risk of this site becoming strictly a blog about 90210, I just had to do a post about another location from the iconic 90s television show.   I finally got Season 2 of the series on DVD and this weekend I spent many hours glued to my television set watching it.    And I must admit I got a little obsessed with finding the liquor store from the episode in which Emily Valentine (my least favorite character in 90210  history) convinces the gang to spend their Saturday night at an underground club.  In the episode, entitled “U4EA”, Emily tells the gang that they will have to visit a liquor store and “exhange an egg” for directions to the oh-so-secret underground club.

While watching the episode I noticed the numbers “6202” and a sign reading “Pat’s” located above the liquor store doors.  I had an inkling that the liquor shop might be located in Van Nuys, near the 90210  studios, so I got to Googling and sure enough, there it was, just a few blocks from where 90210  was produced.  So this weekend, I of course dragged my boyfriend out to Pat’s Jr. Market to do some stalking.  I was so happy to see that after all these years the liquor store looks almost EXACTLY the same as it did back in the 90210  days. 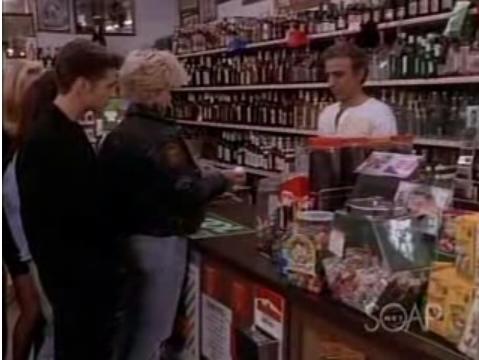 Even the interior is still completely recognizable from the “U4EA” episode.  The poor clerk at the register had no idea what I was talking about when I told him that 90210  had filmed there 17 years ago and I’m pretty sure he thought I was a complete moron when I had my boyfriend snap pics of me inside.  LOL  Geez, some people just don’t get it, do they?!?  🙂

The “U4EA” episode also featured one of my fave 90210  scenes ever – the scene where Andrea and Steve enter a different liquor store and tell the befuddled clerk that they want to exchange an egg.  “Is there something wrong with the egg?” she asks.  LOL  LOVE IT!

You can watch the full liquor store scene here.

Stalk It: Pat’s liquor store is located at 6202 Kester Avenue in Van Nuys.  The former 90210 studios are located just a few blocks away at 15001 Calvert Street.