Thanks to E.J. over at The Movieland Directory, I was able to do a bit more LA Confidential  stalking this weekend.  As I mentioned in a previous post, LA Confidential  is one of my mom’s favorite movies of all time.  She has always been in love with the houses and bungalows used in the movie and has requested several times that I stalk them for her.  In fact, when my family first moved to LA she told our real estate agent that she wanted an “LA Confidential  house” and that’s pretty much exactly the type of house we moved into.  🙂

So when E.J. gave me the address to Kim Basinger’s character’s house from the movie, I of course had to run right out and stalk it.  Lynn Bracken’s house shows up several times in the film, especially the front door and front porch area, and from what I can tell from watching the movie, it appears that both the interior and the exterior of the home were used for filming.  The house is a very cute little 1950’s style Spanish bungalow and it’s pretty easy to see why producers chose to use it in the movie as it looks like it came straight out of the 1950’s. 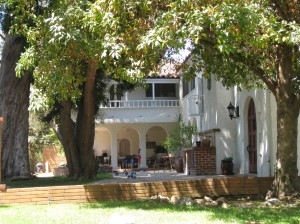 I must admit that when we first arrived at the house, I didn’t immediately recognize it.  The way the movie was filmed was somewhat deceiving and the layout of the house appears much different in person than I’d remembered it looking onscreen.  In the movie, Russell Crowe spends many hours in his car staked out in front of Lynn’s home watching her greet and say goodbye to her many “houseguests”.  But in real life the front door is located on the side of the home and is not immediately visible from the street which made me not entirely sure I was stalking the correct house.  But when I got home and popped in my LA Confidential  DVD it was easy to see that the two houses matched perfectly!  🙂  Thanks, EJ!

I highly recommend stalking Lynn’s house if you are at all a fan of LA Confidential  or 1950’s California architecture.

Stalk It: Lynn Bracken’s house is located at 501 Wilcox Avenue, right where Wilcox meets Rossmore, in Los Angeles.  It is just around the corner from the American Idol and SYTYCD apartment which is located at 445 N. Rossmore.